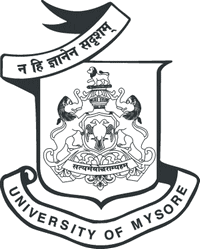 About the University
The University of Mysore is among the foremost institutions of its kind, and is an enduring symbol in the sphere of higher education in India. It was founded by the then Maharaja of Mysore, His Highness Sri Krishnaraja Wodeyar IV and his Dewan, the renowned engineer  - statesman, Sir M.Visvesvaraya, on July 27, 1916. The Maharaja of Mysore became its first Chancellor. A Bill to establish and incorporate the University was introduced in Mysore Legislative Council in 1916. It was passed unanimously on 17th July 1916. The first meeting of the University Council was held on 12th August 1916 and the first meeting of the Senate on 12th October 1916.
The University of Mysore became the first University outside the domain of the English administration in India, the sixth University in India as a whole, and the first ever University in Karnataka. During the institution of the University in 1916, four faculties were constituted viz., Arts, Science, Engineering and Technology, and Medicine. Seperate Boards of Studies and Boards of Examiners were constituted in 28 subjects. The University was also administering 12 other educational institutions.

The main campus of the University, created in 1960, lies in a picturesque area of 739 acres at the western end of the Kukkarahalli Lake. The University headquarters, the Crawford Hall, is located right across the lake on the eastern end. This inspiring locale of the campus was aptly named Manasagangotri (Fountainhead of the Ganges of the Mind) by the poet-laureate, Dr. K.V.Puttappa (Kuvempu). In due course, two satellite campuses were set up in response to the demands of post graduate education from semi-urban/rural areas: Sir M.Visvesvaraya Post Graduate Centre at Tubinakere in Mandya, and the Mysore University Post graduate Centre at Hemagangotri in Hassan.

The University now encompasses 122 affiliated colleges and 5 Constituent Colleges (with an aggregate of 53,000 students). In addition, the University has 37 post graduate departments, 8 specialised research & training centres and 2 post graduate centres that together offer about 55 regular academic programmes to 3,500 students. It also runs a number of employment-oriented diploma courses and certificate programmes. The post graduate departments are reputed for excellence in advanced studies and research, and have attracted projects and grants worth crores of rupees from many national and international institutions.

The University has developed excellent infrastructure for curricular and co-curricular activities. The Mysore University Library offers a collection of over 8 lakh books, 2,400 journal titles and 1 lakh volumes of journals. The main campus features an amphitheatre, an auditorium, a swimming pool, and hostels for women and men with modern amenities and comforts.

The University has established a rapport with many well-known and prestigious universities and institutions abroad for academic, technical and cultural exchange.

Having served the cause of higher education and research with distinction and dedication for almost the whole of the 20th century, the University of Mysore now envisages the 21st century as an era of even greater growth and success during which it will produce well-qualified and well-motivated youth to serve humanity as teachers, administrators, doctors, engineers, scientists, lawyers, social workers and in various other fields. As it gets closer to its centenary celebrations, the University looks forward to newer ways of fulfilling the vision of its Founding Fathers.

The University Emblem
The University emblem is adapted from the Royal Emblem of Mysore. It depicts the bird Gandabherunda flanked on either side by the lion-elephant Sharabha (mythical creature believed to be stronger than the lion and the elephant, and upholder of righteousness), surmounted by a lion.
The motto of the University, as envisaged in its emblem is, "Nothing is Equal to Knowledge" and the second line "I Always Uphold The Truth" summarizes the vision, moral fabric and idealism of the Founders and of the University.
website: www.uni-mysore.ac.in
Email This BlogThis! Share to Twitter Share to Facebook
- Physics Kerala

Posted by our guest writer S . If there is any content violations Report the Administrator by clicking "Report Problem".

Comment.. and check "Notify me" for following comments to your email.
If you are experiencing any difficulty in posting comments, then try another browser. (example use Google Chrome)

From this custom search you can get search results only from the important and recognised sites, you can refine your search related to your interest. ..you will like it.. try now.. Add this widget to Your Blog